Youth Escaping From İndustries To Service 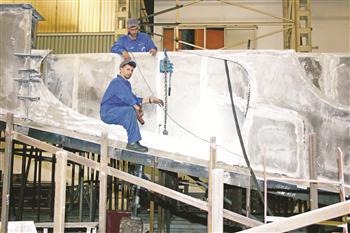 A recent study shows that even trained young people do not prefer working in manufacturing. Companies complain of lack of skilled workers

The salaries in the industrial and service sectors should be balanced, SETA’s recent work market survey says.

With many Turkish companies struggling to find enough well-trained employees, many Turkish youth are escaping from industry in favor of the service sectors, according to a recent study by the Foundation for Political, Economic and Social Research (SETA).

Turkish companies will lack manufacturing workers, operators and skilled employees along with unskilled staff in the near future, the study has warned, noting that salaries in industry should be increased to the level offered by the service sector to stop the drain.

However, conditions in the high-technology and industry sectors are not yet demanding more highly skilled employees, it said.

With the increased duration of compulsory education and a greater capacity in higher education bodies, a job market that is capable of offering jobs to more skilled workers should be created, the study said, calling on the government to lend greater support to the development of such companies.

Turkey’s unemployment rate rose to 9.1 percent in the August-October period, according to official data, which calculated youth unemployment at 18 percent.

No high demand in language skills
Foreign language skills are not a priority for companies, SETA said, warning that this posed risks for a country that aims to increase its exports to $500 billion in 2023 from last year’s $152 billion.

Thirty percent of the companies that participated in the study have failed to fill empty positions over the past year, the report said. According to data gathered by SETA, the five main reasons behind the lack of managers and skilled workers in industries are problems deriving from the education system; the geographic positioning of the employer; rapid circulation in workforce; the growing difference between points of view and expectations of employees and employers; as well as insufficient social aid.

Many companies are choosing to train their employees themselves to overcome such problems, the study said.

Meanwhile, a large portion of participant companies said some reasons such as unregistered employment and salary policies that boost unfair competition are preventing them from taking steps to grow further.

The study was made through direct interviews with 107 companies and 2,018 surveys.

Previous Is it obligatory to employ a full-time physician for SMEs?
Next Contemporary Psychological Challenges at Work By Ela Erozan Gursel