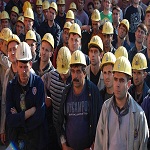 Turkey’s unemployment rate fell to 9.1 percent in the three months to August from 10.6 percent in the same period last year, official data showed on Monday, AFP reported.
The number of jobless fell by 273,000 people to reach 2.509 million on a 12-month comparison, the statistics institute said on the basis of a survey of about 42,353 people.
Turkey’s economy had staged a spectacular recovery from the global crisis, growing 8.9 percent in 2010.

But unemployment remains a major challenge for the government in a country where many young people swell the workforce each year, and a declining farming sector drives unqualified labourers to urban areas.
Turkey’s jobless rate is determined through household surveys across the country that are then used to make a nationwide three-month projection.
Experts say the figures do not reflect the overall picture because of widespread undeclared or hidden unemployment, or the employment of educated, qualified people in menial jobs.
However, by international standards, comparable national official unemployment figures in advanced countries are based on the number of people registered with the authorities as unemployed, and available for work.