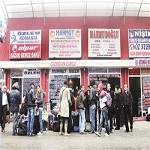 ISTANBUL – Hürriyet Daily News
A high number of Armenian and Georgian people working in Turkey are leaving the country in the wake of a recent law implementation that complicates working permits for foreign people. While workers complain of extreme financial difficulties, Labor Ministry announces that there will be exceptions for house workers
Armenians and Georgians are rushing to exit Turkey before a new law complicating residence procedures comes into effect Feb 1. Many workers from the countries have implored PM Recep Tayyip Erdoğan to quash the law, saying it will make it impossible for them to continue living in Turkey.

Armenians and Georgians are rushing to exit Turkey before a new law complicating residence procedures comes into effect Feb 1. Many workers from the countries have implored PM Recep Tayyip Erdoğan to quash the law, saying it will make it impossible for them to continue living in Turkey.

A new law that will make it more difficult for foreigners to continue living in Turkey without a residence permit has prompted an exodus of Georgians and Armenians who want to leave the country before new regulations go into effect Feb. 1.

“I am pleading to Turkish Prime Minister [Recep Tayyip] Erdoğan [to prevent] this law from going into effect. I am feeding and educating my kids with money that I earn here,” said Sofiya, a 47-year-old Georgian citizen, as she was getting ready to travel back to Tbilisi.

“The Law of Foreigners’ Residence and Travel in Turkey” has also put the Emniyet Bus Terminal in Istanbul’s Aksaray district into a frenzy, as Georgians and Armenians who are mainly employed in house labor, babysitting and patient care are rushing to leave Turkey to avoid incurring any penalties.
“Bread has no country. Wherever there is bread, we, the economically vulnerable people, go there. We have to live and support our families. We have no other chance,” Hayganuş, an Armenian citizen, said in reference to the tough rhetoric employed by Erdoğan in response to a draft bill on Armenian genocide allegations that came before the House of Representatives in the United States in 2010.

Until now, many foreigners have done “visa runs” to neighboring countries, exiting Turkey after their 90-day visa ends and then immediately re-entering with a new 90-day visa. However, the new law prepared by the Labor and Social Security Ministry will only allow foreign citizens entering the country with a tourist visa to stay in Turkey for three months, after which time they will be obliged to wait for another three months abroad before they can return.

As many Armenian, Kyrgyz and Gagauz residents in Turkey work in such services as home labor and patient care, they will also be able to take advantage of this provision.

Foreign citizens who arrive in Turkey by means of a tourist visa and later obtain a work permit will be allowed to extend their stay in the country for a year or more, Çelik added.

Foreign workers, however, will then be obliged to pay a hefty premium of 400 Turkish Liras as well, while they will also be barred from obtaining employment in a sector where Turkish citizens demand work.

Prime Minister Tayyip Eroğan last year expressed that some 170,000 Armenians live in Turkey.
The Armenian Foreign Ministry, however, said only 15,000 Armenian citizens currently reside in Turkey.
Armenians in Turkey on the other hand, seem worried.

“As Armenian [citizens], we always lived in fear of being sent back. Such a return would mean chaos for my family. I can neither find food nor take a leave for three months and return back, or find a job,” said Hayganuş, who has been taking care of an elderly woman in Istanbul.

Previous A Real Life Utopia: Baksı Museum By Ela Erozan Gursel
Next Surviving and thriving in the Turkish work culture (3)