Employment in Turkey resisting against low foreign inflow and growth 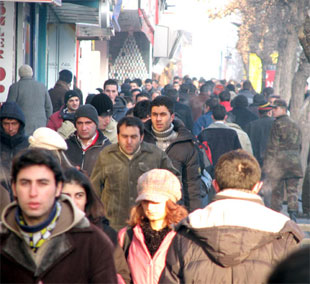 While the current account deficit of the last three months has reached $16.5 billion, only one-fifth of it was financed by new capital flow. Employment is surviving because of the construction and services sectors, but unemployment is around 9 percent.

The difficulties experienced in foreign financing have immediately shown themselves in the financing of the current account deficit. However, despite the foreign capital flow and the drop in the tempo of growth, a significant decline in employment has not yet been seen as it remains around the 9 percent threshold.

The year 2014, in which Turkey will go through two or perhaps three elections, has been dubbed a year of the rise of political risk by foreign investors and observers.

Turkey has been included among the “Most Fragile Five” countries by various authorities. It looks like when political vulnerability is added to Turkey’s economic fragility plus the change in the monetary climate in the United States, all of these seem to have slowed down the foreign capital inflow to Turkey.

The capital inflow has been fluctuated with instable inflows of foreign speculative capital taking advantage of the cheapening of the stocks; however, this is generally way behind the tempo experienced in previous years. A slowdown in the inflow of foreign resources also means the slowing of growth. As a matter of fact, international credit rating agency Moody’s has lowered Turkey’s credit rating from “stable” to “negative” and confirmed the credit score as “Baa3,” basing it on risks.

Difficulties experienced in foreign financing have immediately shown themselves in the financing of current accounts deficit. The Central Bank has announced the current account deficit of February as $3.1 billion. The deficit which was $4.9 billion in January, even though it looks as if it has dropped due to the fall in growth, the ability to finance the current account deficit with new inflow of capital is weakening. The $3.1 billion deficit of February was able to be met with only $2.6 billion capital inflow; the rest was met with unregistered capital inflow.

The current account deficit, when December 2013 and the first two months of 2014 are totaled, comes out as $16.5 billion over three months. It was $15 billion during the same period one year ago. In the three months of last year while the entire deficit was financed by capital inflow and a contribution of $1 billion was made to the reserves, in this year’s three months, only $3.1 billion has been found for a current account deficit of $16.5 billion. And from the unregistered (net errors and omissions) item, nearly $8 billion – and from the reserve, $5.5 billion – were used to finance the deficit.

Regardless of the dimension of the current account deficit, when the capital inflow is weak to finance, it causes international rating agencies to evaluate the country’s solvency as weak. With the slowdown of growth, even though the current account deficit has relatively shrunk, as long as the foreign capital flow is weak to finance, it looks as if Turkey will be rated as even a riskier country.

Despite the foreign capital flow and the drop in the tempo of growth, a significant decline in employment has not yet been seen; unemployment has not gone up to two digits yet as expected; it is resisting around the 9 percent threshold. When seasonally adjusted, unemployment, which was 9.5 percent in January 2013, went down to 9.1 percent 12 months later.

It looks like employment opportunities, particularly in the construction and services sectors, have been effective in that there seems to be a decrease in unemployment and increase in employment.

It is also remarkable that after May 2013, when the country’s economy was under the influence of the United States’ FED monetary climate and when the foreign exchange rate started climbing, the increase in employment continued in construction and services – even if the fluctuation experienced in the economy negatively affected employment in agriculture and industry.