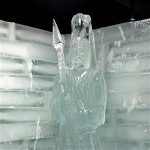 The Magic Ice Museum which is the first and only ice museum in Turkey opened last year in Istanbul with the ‘Vikings’ exhibit, is now preparing to present a new concept, ‘Turkish and Ottoman History.’ Hundreds of tons of ice have been used to create new sculptures depicting the past.

Magic Ice Museum, where blocks of ice turn into art in the hands of masters, will present masterpieces featuring Turkish and Ottoman history.

Works for the new concept started Nov. 24, and the museum is ready to present history starting from the first age to the foundation of the Ottoman State and on to the conquest of Istanbul and the Republic Period.

Magic Ice Museum, which was built by Norwegian Lofoten Trading at the Forum Istanbul Shopping Mall with a $20 million investment, began welcoming visitors in April 2010. The museum has said goodbye to its first concept, “Vikings,” and has transformed into a new exhibition area in an atmosphere chilled to minus 5 degrees Celsius.

The museum decided upon the new concept “Turkish and Ottoman History” through a poll conducted among its visitors.

Chronology was paid great attention to when preparing the new concept, the museum’s General-Director Odd Roar Olsen said, adding that it was the world’s first museum where history was depicted on ice.

In the new concept, visitors will be able to see sculptures such as hunters, a Çatalhöyük house, images from the conquest of Istanbul and the founder of the Turkish Republic, Mustafa Kemal Atatürk. The exhibition will be an informative and entertaining one for visitors interested in history.

Along with the visual feast of sculptures, there will also be film screenings and informative presentations during visiting times to explain the concept of the exhibit. The souvenir shop at the museum will also sell products depicting history.

Olsen, also a sculptor, was one of the team members working for the museum’s new concept. “Opening this museum last year in Turkey, we have showed something from our own culture to Turkish people,” Olsen said.

“Since it is a delicate matter, we have collaborated with consultants to not make any errors. We created the first concept, ‘Vikings,’ with foreign sculptors. We have preferred to work with Turks on this concept,” Olsen said, adding that both countries’ culture comes together in this way.

Olsen said over 20 days 400 tons of ice were used in creating the new concept, an increase from 300 tons used in the first exhibition. The ice has been produced in a special facility founded by the Magic Ice Museum in Istanbul.

Previous Is the employer obliged to give a raise on the workers salaries?
Next Those who grew several times more than their sectors