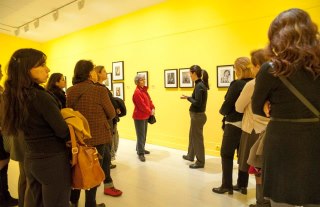 ISTANBUL — Khalid Khreis, a Jordanian artist, is on a mission to fight reductionist notions of contemporary Middle Eastern art.

As curator of an exhibition at the Pera Museum in Istanbul, running through April 21, he has included paintings, sculptures, engravings and ceramics by 44 artists spanning different styles and generations.

The works — from Morocco, Algeria, Libya, Lebanon, Egypt, Syria, Tunisia, Jordan and the Palestinian territories — have been drawn from the 3,000 pieces at the Jordan National Gallery of Fine Arts, where Mr. Khreis is director general.

“The Arab world is rich with its diverse ethnicities, beliefs, customs, traditions and cultures, all reflected in the choice of works for this exhibition,” he wrote in the catalog. “It is a gift to the Turkish people that can hopefully change the stereotypes that naturally grow between different people as a consequence of accumulated misinformation and miscommunication.”

The show, “Between Desert and Sea: A Selection from the Jordan National Gallery of Fine Arts,” does not shrink from topics like cultural identity, popular revolt or the female form.

The main themes, Mr. Khreis said in a recent interview at the Pera, include abstract examinations of “the political issues, the social issues,” using Arab calligraphy, motifs and symbols.

“Most of the artists, when they studied, studied in Western countries under Western rules,” he said. “Once they came back to their countries, they start looking for their identity. So some of them are looking within the social issues; others within the heritage of Islamic art, or popular art.”

Western-style easel painting was introduced to the Arab world in the late 19th and early 20th centuries, Mr. Khreis wrote in the exhibition catalog, and art schools followed: in Cairo in 1908; Algiers in 1920; Tunis in 1923, Beirut in 1937, Baghdad in 1941 and so on, staffed by foreign instructors and later by local artists trained in Western techniques at art schools in European capitals like Paris and Rome.

It was not until the 1950s that what he calls “a flux of Arab artists” started to create an identity within their own heritage, exploring traditional forms of expression like calligraphy.

These artists, he said, reacted then, as now, to regional and international events. One of his own works in the exhibition is a prime example. “Arab Spring 2,” an acrylic painting on wood, using a bold spin on Pointillism, has a “political message,” said Mr. Khreis, who studied art in Italy, Mexico and Spain.

“I start with points,” he said, representing the mass of people who gathered in 2011 in Cairo in Tahrir Square to protest the government of President Hosni Mubarak. “You can see many people, demonstrations. At the same time, you can read it in a different way, it’s like the cosmos. It free, open to interpretation.”

The exhibition also includes hands-on work, like the interactive piece by the Moroccan artist Omar Youssufi that riffs on the sands of time and layers of civilizations in the Middle East.

The piece, a wooden box with a glass cover, contains ceramic carvings and amulets — and sand that flows from one section to the next when the box is turned. Unusually, for a museum show, spectators are actually encouraged to touch and handle the work of art.

Bringing the show to Turkey, he said, emphasizes “we are neighbors culturally and geographically, and now Istanbul, with the evolution of contemporary art, is becoming a center of art in this area.”

An oil painting by Fahrelnissa Zeid symbolizes the ties between Turkey and Jordan. Ms. Zeid was Turkish, studied art in Istanbul and Paris and married an Arab prince. Ms. Zeid, best known as an abstract painter, died in 1991 after living for 20 years in Amman. Her painting, “Feast in the Desert,” done in an almost naïf style, depicts a gathering under bright yellow tents in a scene that could come from an Ottoman-era miniature.

The exhibition has several works by Syrian artists, a bittersweet reminder of the cultural wealth of that war-ravaged country. They include an abstract oil painting, “The Child of Palestine” by Fateh Moudarres, a pioneer of modern art in Syria; “Reversed Time,” a bronze sculpture on a pedestal by Mustafa Ali; and “Calligraphy,” an oil by Mahmoud Hammad, who helped introduce calligraphy to Syrian art, Mr. Khreis said.

Her abstract treatment of four torsos in blues and pinks, she said, is about “the many faces of a woman — the masks that were put on — which is why some parts you see and some parts you don’t.”

“It’s sort of elusive a little bit — it’s not all there, you know?” she said. “Men and women, we put the mask on as needed.”

Another work that addresses the issue of the pros and cons of masks is “Impossible Dream,” by the Palestinian artist Laila Shawa, a nearly neon assembly of veiled women unable to taste the tempting ice cream cones in their hands.

Princess Wijdan Bint Fawaz al-Hashemi, founder and president of the Royal Society of Fine Arts in Amman, wrote in the exhibit catalog that Middle Eastern artists began to return to their roots after World War II as Western colonialism retreated.

“Gradually, a growing number of Arab artists woke up to the fact that they were not after all Westerners, no matter how hard they strove to be so,” she wrote.

These artists, she added, “felt torn between their present, which was so visibly and intellectually influenced by the West, and their past and its traditions.”
Today, regional trends, she said, are dissolving “into globalization,” a movement reflected in her own artworks.

There are two pieces by the princess in “Between Desert and Sea,” offering a contemporary take on calligraphy. One is a Murano glass sculpture called “Love,” and the other is a mixed media work called “I Am You.”

Previous Unemployment Highest Among Journalism And Arts Graduates İn Turkey
Next Where can new workers get their health reports before starting work?